Hi everyone!
So last night I was lucky enough to be invited to the launch of Gelato Village's new ice cream flavour range. Its called the Issimo range and it's absolutely glorious. The flavours are so incredibly delicious, I honestly love them so much. 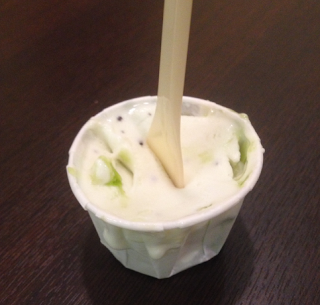 The first sorbetto we tried was Kiwi, Coconut and Lime. I haven't eaten kiwi in a long because it always makes my mouth swell up, so it was quite nostalgic to taste it again! The combination of kiwi and coconut ice cream is amazing, and I would never have thought they would go together, but oit really works! It's all natural, and you can really tell. There was a lime sauce rippled through it which really cut through the sweetness of the ice cream. SO good! 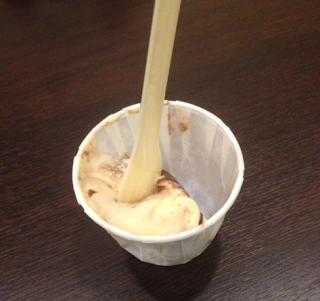 The second ice cream we tried was called Cremina.This one had a slightly citrusy flavour, and the texture was really smooth and creamy as it was made with eggs. It had a chocolate hazelnut sauce running through it, and, coming from someone who doesn't like hazelnuts, it was absolutely divine. It was a favourite among the people at my table, which is understandable because it's rather amazing! 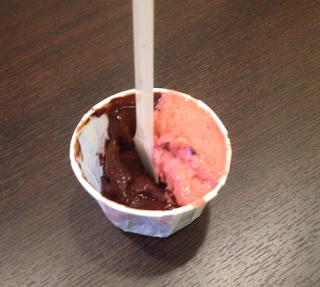 Now this beauty here is the Yin and Yang sorbettos. The pink one is a raspberry sorbet with grated chocolate in it. It's so sharp and.. Well, raspberry-ish? It's made with fresh raspberries, and as it's only available while they're in season, you'd better get your hands on it before it goes forever! The brown one, as you might have guessed, is chocolate. A dark chocolate sorbetto that is. This one was my favourite out of all the flavours. Normally I can be a bit funny about chocolate ice cream, but as this was a sorbet it was nothing like an ice cream. It was much less sickly and sweet. It had a very intense flavour, but it wasn't cloying or anything which was nice for a change. Honestly I can't praise this one enough. We were told that they were meant to be eaten together. Now think how highly I praised them as individuals. Together they were like a party in my mouth. Honestly, the two contrasting flavours married so well it was ridiculous. The sharp raspberry with intense chocolate hit was just a match made in heaven.
After trying all the ice creams on their own, we got to have a sneaky look in the kitchen to see how the most basic ice cream was made. The Stracciatella. 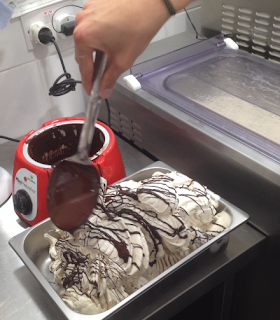 It was really interesting to see how the machines worked, and how the ice cream was put into the tub (for me anyway. I find it so amazing how precise it all is). The machine that churned and froze the mixture was insane, it had all these different options on it, and the ice cream was finished in around five minutes! It was a bit of a tight fit in the kitchen as it was quite small, and we created an accidental obstacle course for the poor trainee who was making everything!

These three masterpieces are the new sundaes, or coppas. Looking back on them now makes me want to eat them all over again. To the left is the Coppa Massimo. It was the Cremino ice cream with whipped cream, chocolate hazelnut sauce and chopped nuts sprinkled over the top. Of course it was delicious, I mean how can you go wrong? In the middle is the beauty that is the Yin and Yang Coppa. Pure deliciousness (the Yin and Yang sorbets) with whipped cream and fresh raspberries. Obviously it was my favourite sundae. To the right is the Kiwi, Coconut and Lime sorbet, with a scoop of Fruits of the Forest (Frutti De Bosco I think? Correct me if I'm wrong..), served with whipped cream, fresh kiwi and fresh strawberries. I was so happy when I saw the strawberries as they're my favourite fruit, and they worked so well with the kiwi ice cream! 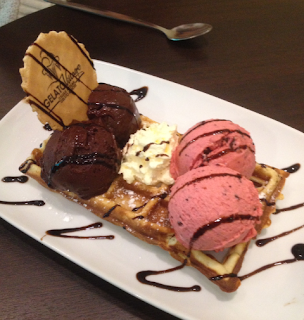 The last thing we had from the new menu was this insane Yin and Yang waffle. Now if you know me, you'll know I love waffles. I could eat them all day, every day. So when I found out that waffles were on the menu I was overjoyed. I can 100% say I wasn't disappointed in the slightest. The waffles were freshly made and smelt amazing. The ice creams, as I'm sure you know by now, were delicious. I was unsure about the balsamic vinegar drizzled over the top, but I was pleasantly surprised, as it added a tanginess I didnt know it needed. All together it really became the ideal dessert. Mana from heaven indeed! We did get given the option to try the other waffles, which looked insanely good, but by this time I was in an ice cream coma so I had to decline. I kind of wish I hadn't...
At the end we were offered hot drinks. I was interested to see if the drinks were as up to standard as the ice cream, so I opted for a Latte, which is my general option when I drink coffee (other than sugary frappes...). The coffee was really good, so I finished the night on a high! My sister tried the hot chocolate which was divine (I reccomend it!). Just before we left, we tried that stracciatelli ice cream from earlier in the evening, and yes, it was brilliant. Very creamy. If you prefer plainer ice creams, then I'd definitely suggest that!
I am honestly so grateful that I was invited by the people of Gelato Village to this event. The service was on point, and everyone was so lovely, always checking if we were happy and enjoying ourselves. Thank you for having us, and for being awesome! I had a great time and I'll definitely be coming back to raid your kitchen! Gelato Village is in St. Martin's Square, Leicester. If you get the chance, check it out! You wont be disappointed!
Yasmin x

A Penny In The Fountain